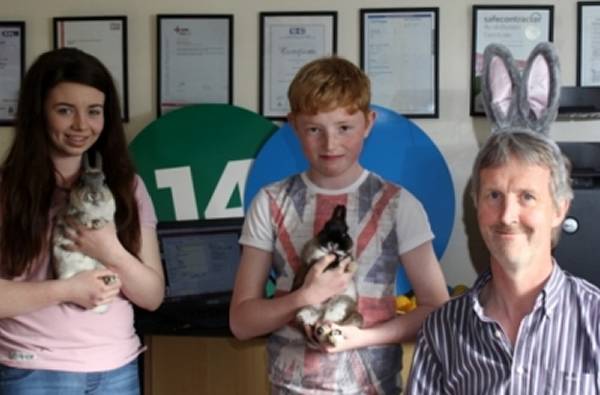 It was a very hoppy Easter for Hunsonby bunny Thumper and his young owner Ben Welsh after the duo were chosen to launch Pride in Penrith Lottery’s special draw on 8 April.

The lottery ran a competition to find an Easter bunny for their £500 draw, and Thumper was first out of the hat.

“This was a particularly special draw for us, as it’s the first during our fifth anniversary year,” said Rob Udale, lottery chair. “To celebrate our five years of giving out grants to local good causes, we’ll be running five special draws this year, making five of our members £500 richer.”

Field View Electrical in Penrith, run by Ben’s dad Paul, kindly hosted the draw. It was a bumper bunny occasion, as Thumper’s sister Misty came along for moral support, with Ben’s sister Chloe and mum Judith. Paul had spotted the competition on Facebook and mentioned it to 12-year-old Ben and Chloe, who’s 15, both pupils at Ullswater College.

There was a brief ‘rabbit in the headlights’ moment when the lottery laptop and the office WiFi refused to see eye to eye, but a heroic staff member saved the draw with a connection through his mobile phone. With the lottery system loaded and ready to go, Rob Udale handed over to Thumper to set the draw in motion with the click of a furry paw.

It proved to be a lucky rabbit’s foot for one member, Pauline Studholme from Penrith, whose name came up as the winner a few moments later. All the bunny antics are captured on video on the lottery’s YouTube channel.

There were prizes for the guests of honour, too. Rob presented Easter eggs to Ben and Chloe and a selection of rabbit treats and toys to their furry friends, extending his thanks to the family for entering the competition and helping with the draw.

“Our thanks also to the staff at Field View Electrical, who seemed unphased by having rabbits hopping along the corridors!” Rob said.

The family hadn’t come across the lottery before, but will now be keeping an eye out for future draw antics.

“Thumper and Misty are two years old but they’ve never been in a competition before,” Judith said. “We also have a hamster, a dog and a Shetland pony so we’ll look out for any lottery draws for them in the future!” Judith said.

Rob encouraged anyone with an interest in the local community to join the lottery in its fifth anniversary year.

“Over the past five years since the lottery began, we’ve given out nearly £50,000 in grants to local organisations and projects in Penrith and the wider area – on average £10,000 a year,” Rob said. “That’s only been possible thanks to the generosity of our members, who pay £2 a week to take part in our weekly draws, with a chance to win up to £5,000. With more members, we could do much more.”