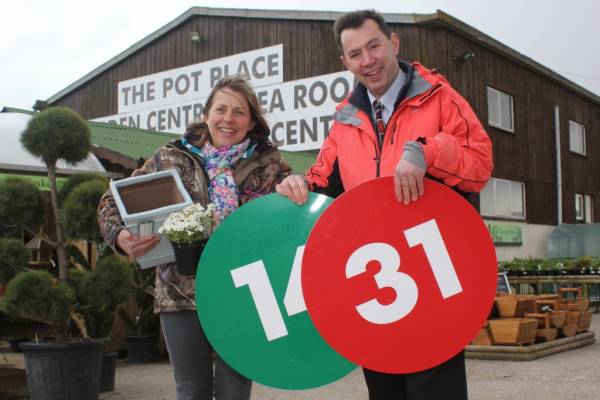 One lucky member of the Pride in Penrith Lottery is heading into the long grass after winning £500 in last month’s special draw.

Liz Newport, who runs garden makeover business Wildroof Landscapes based in Catterlen, plans to spend her winnings on improving her own garden, which she says gets neglected as she’s busy helping others with theirs.

“It’s a case of the cobbler’s children having the worst shoes!” joked Liz. “But this win with the Pride in Penrith Lottery has spurred me on to give my garden some much-needed TLC.”

Liz is a relatively recent member of the lottery, joining 18 months ago after finding out about it at a business networking meeting.

“I go to the Cumbrian Women in Enterprise networking group in Penrith, which is run by one of the lottery’s board members, Annabel Candler,” Liz said. “She mentioned the lottery and I thought it was a great way to support Penrith.”

The lottery’s profits are given out as grants to community organisations and projects in and around the town. Thanks to members’ subscriptions, the lottery was able to give out 14 grants last year, supporting local sports groups like Penrith Cricket Club and community improvements such as the new games area in the Scaws part of town, as well as helping to make events like Winter Droving and Eden Food and Farming Festival possible.

“Thanks to members like Liz paying £2 a week, we gave out a massive £23,000 in grants last year,” said lottery board member Charlie Thornton, who caught up with Liz at the Pot Place Garden Centre at Plumpton this week, where she sources most of her pots and some of her plants for clients.

“As well as knowing that they’re helping their community, our members have a chance to win up to  £5,000 in our weekly jackpot draw and £500 in the special draws we hold several times a year, like the one that Liz has just won.”

The next £500 special draw will be during the summer and the jackpot draws happen every Wednesday.

“Hopefully Liz’s win will sow the seeds of community spirit and inspire others to join us and help our area,” Charlie said.

The lottery also offers a business membership, giving local firms a way to support their community.