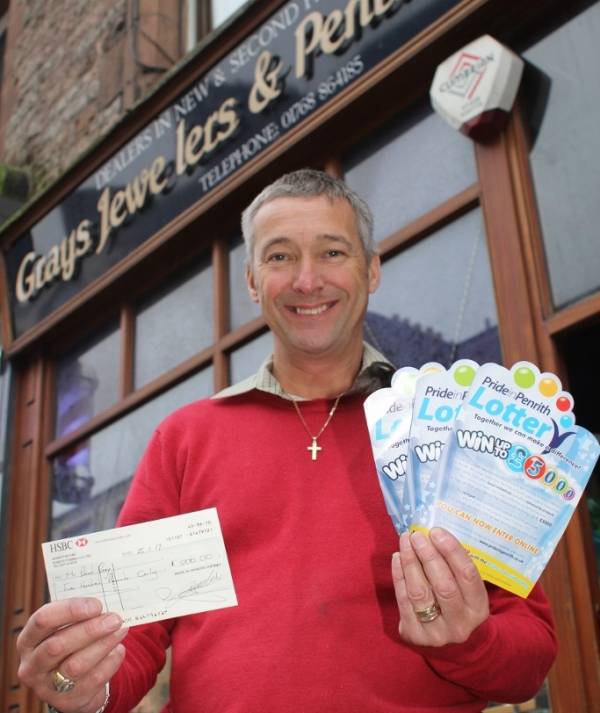 It’s been a sterling start to 2017 for a Penrith jeweller who has won £500 with the town’s community lottery.

David Gray, of Gray’s Jewellers on King Street, matched all four numbers to win the New Year Special Draw. He’s had two lines in the Pride in Penrith Lottery since it began six years ago, and one of them struck gold in the drawing on 25 January.

David decided to join after hearing about it from Richard Utting, who’s part of the team of volunteers that run the lottery.

“I liked the idea of a bit of a gamble and it was for a good cause so I was happy to join,” David said.

It turns out the money will be staying in the area and supporting a local organisation, as David plans to use his winnings to pay for membership in the town’s golf club.

Gray’s Jewellers is one of several businesses from the town and surrounding area that are members of the Pride in Penrith Lottery, supporting their local community. It’s also among the longest-running businesses in the town. His father opened it as a coin shop in the same premises in 1974, and David has expanded the firm’s services over the years, from making bespoke wedding rings to on-site jewellery repairs, as well as fitting watch straps and batteries. He also offers a repair service for clocks and watches, and commissions for jewellery making.

“It’s great to see David clocking up a reward for being such a loyal supporter of the lottery since it began,” Richard said. “He’ll be glad I pestered him to join after all!”

The lottery has given out around £6,500 in prizes in the past year – from the regular prizes of £20 for matching three numbers, to the £5,000 maximum jackpot back in October. The lottery also holds several £500 special draws each year, like the one David won, giving members even more chances to win. Because all the lottery’s profits are given out as grants to local groups, the community wins, too.

If you're from a business or you're an individual who fancies a flutter while helping your area, join online or call us on 07737 049516.

« £5,000 will be won on Wednesday in Penrith Lottery draw

Apply for the best little job in Penrith! »