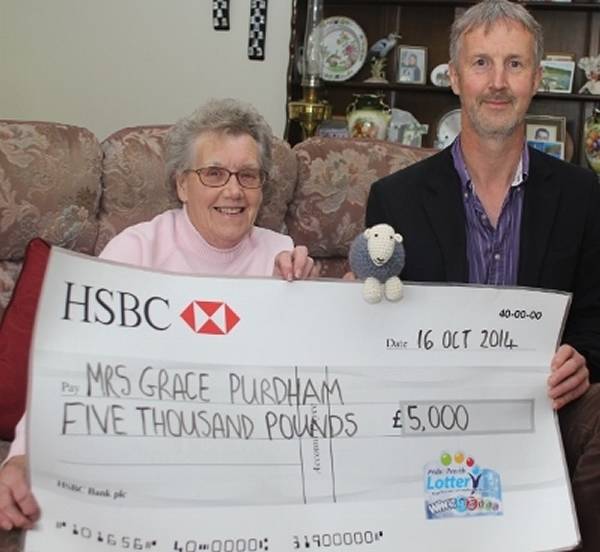 Mrs Purdham has been a member of Pride in Penrith Lottery since it began four years ago, and her generous contributions over the years have brought her a reward as well as helping the community.

The draw was a reason to celebrate for the lottery as well as for the lucky winner.

“The times when we’ve reached the £5,000 maximum jackpot and been able to reward one of our generous supporters have been some of the highlights of my time as chairman of the lottery,” said Rob Udale. “There’s nothing like giving one of our members that fantastic news, and of course this time around there’s been the added excitement of teaming up with Herdy UK to do the draw. It’ll be hard to tup this!”

The little herdy sheep who has spent the past few weeks in Eden is THE herdy, who’s based at Herdy HQ in Kendal.
“I’d like to say thank you to Herdy UK for so readily supporting us when we approached them with the idea,” Rob said. “Thanks to the stir that herdy’s presence created – both in the local media and online – we’ve gained new members and engaged with a lot more folk on social media.”

Rob also thanked everyone who’s got into the herdy spirit on the lottery’s Facebook and Twitter feeds.
“One way that people can help the lottery without it costing them a penny is to join our flock on social media and share our posts, to spread the word about the lottery and the grants we give to local good causes.”

Rob added: “And we’ve got some more Facebook and Twitter fun up our sleeve in the run-up to Christmas!”