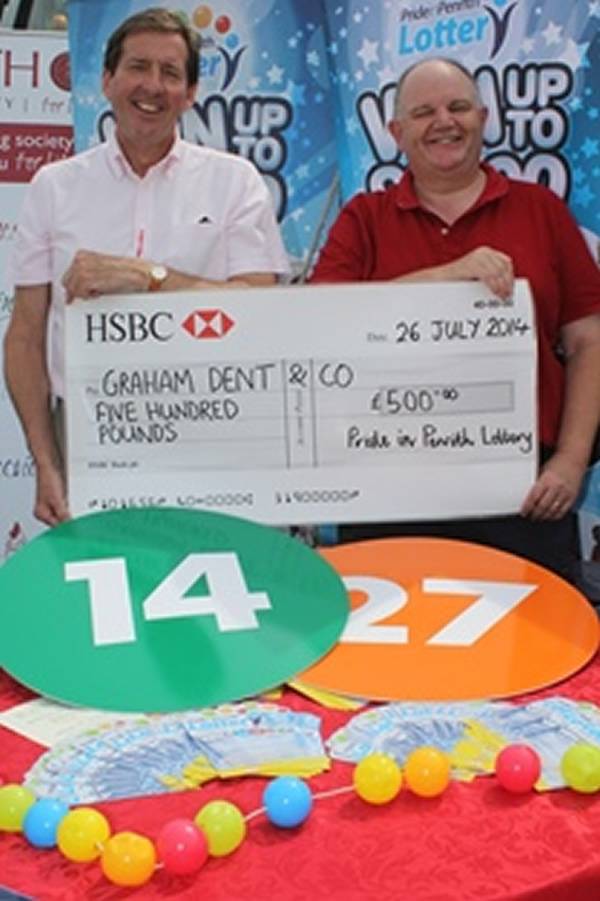 Lottery member’s in the business of winning

A Penrith business is £500 better off after winning the town lottery’s special fourth anniversary draw.

Graham Dent & Co, a long-standing accountancy firm based on Scotland Road, has been a member of the Pride in Penrith Lottery since it began in 2010. Chris Dent received the cheque on the firm’s behalf on Saturday at a presentation at Penrith Show.

Chris was initially urged to join the lottery by one of his clients, Maggie Cormode – a member of the lottery board.

“We’ve continued to support the lottery ever since because it’s a great way for a business to help clubs and organisations in our area,” Chris said. “I’m the treasurer for a local cricket club, so I know how hard it is to raise money.”

Encouraging other businesses to join Pride in Penrith Lottery, Chris said: “If more firms become members, it will put more money in the lottery’s pot to give out as grants, and that would make life a lot easier for groups out trying to make a difference in the community.”

Chris plans to give some of the money to his cricket club and it sounds as though his staff will enjoy a little treat as well.

Pride in Penrith Lottery offers business memberships, where firms can take one or more lines in the weekly draw, costing just £2 a week per line.

Winnings go from £20 for matching three numbers, up to a maximum of £5,000 if they scoop the jackpot. Companies can use any winnings however they wish, but many of the lottery’s business members see it as a way to reward their staff, to bolster the Christmas party fund or split among their employees.

Employees can also club together and join as a syndicate through the business scheme.

“Most local businesses depend on the community in Penrith and wider area for their trade and their employee base,” said Rob Udale, lottery chairman. “Taking part in Pride in Penrith Lottery gives them a way to put something back and help make our community stronger.”

There’s more information about joining the lottery at www.prideinpenrith.co.uk or call 07737 049516.

Lottery goes under cover at Langwathby »