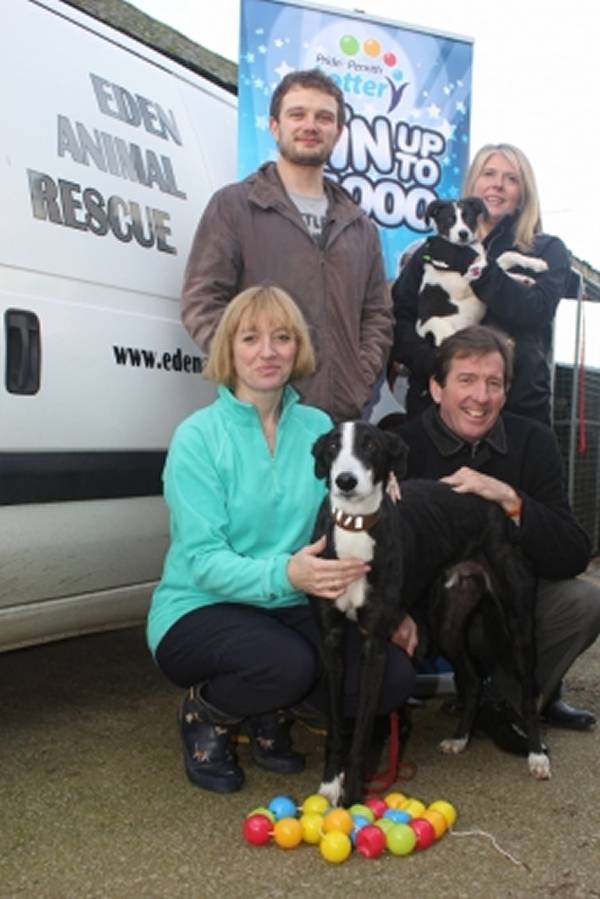 Lottery goes to the dogs for public pet vote

One lucky cat or dog from Eden Animal Rescue will set off Pride in Penrith Lottery’s Christmas special draw, and the public is being asked to help choose which rescued pet it will be.

Six dogs and cats from the rescue centre at Hardendale near Shap have kindly agreed to put paw to laptop on Wednesday 17 December to launch the £500 draw and give one of the lottery’s members an early Christmas present.

Now it’s down to the public to vote for the dog or cat they want to push the ‘go’ button. Sarah Bean, manager at Eden Animal Rescue, introduced the four-legged candidates, all of which are waiting to find new homes.

“When we announced the opportunity in the dog kennels, there were howls of excitement and our first contender emerged as gentle giant Sheeba, a five-year-old German Shepherd whose owner sadly died,” Sarah said. “The next paw in the air was that of our adorable lurcher cross, Jack, who’s four years old. Behind him by a whisker was Bess, a friendly 12-year-old Border Collie who came to us this month after her owner passed away.”

The response in the cattery was equally positive, but of course tempered with a dignified feline reserve.

“The first cat to purr in agreement was the beautiful and cuddly Robertson, who’s ten years old with a gorgeous semi-long ginger coat,” Sarah said. “Delilah also fancies her chances of being top cat. She’s a very affectionate black and white cat, who came to us as a stray. Even little Katie, who’s overcoming her initial shyness and becoming a lovely tame cat, raised a tail to the challenge.”

Rob Udale, chair of the lottery board, said the public vote has put the cat among the pigeons in Shap, with some healthy competition among the pets vying to come out top dog.

“When we first put the idea to the much-loved Eden Animal Rescue charity, we were afraid they’d think we were slightly barking, but happily both humans and animals at the centre were very willing to get in on the draw,” Rob said. “We hope the public will have a look at the shaggy dog stories on the lottery website and pick who they’d like to be the cat’s whiskers.”

Everyone who votes will have a chance to win a pack of Eden Animal Rescue Christmas cards as an extra thank-you from the charity for taking part. The public vote closes at midnight on Sunday 14 December and the winner will be announced on the lottery and Eden Animal Rescue’s social media the following day. All of the lottery’s members will be entered into the £500 Christmas special draw – one of four extra chances to win throughout the year in addition to the normal weekly draws.

“Lottery membership at just £2 a week could be a fantastic Christmas present for a loved one, or join and give our local community a gift that makes a difference throughout the year,” Rob said. “We’ve now given out more than £45,000 in grants over the past four years, and with extra members we could donate even more.”

See all six of the cats and dogs and cast your vote now!

Lottery grant brings club’s plans out of the long grass »