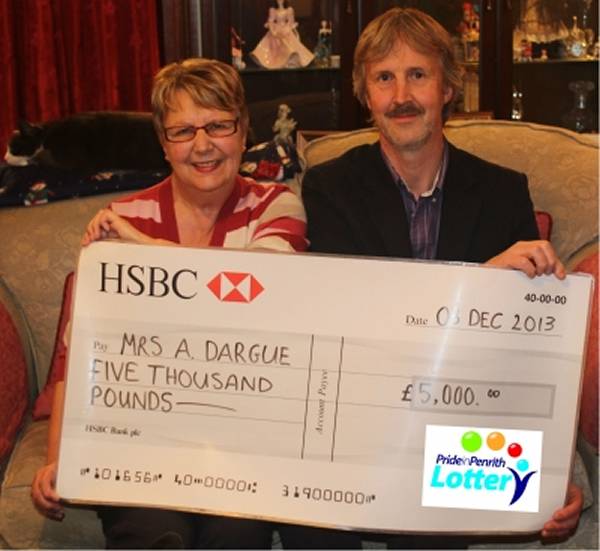 A Penrith woman hopes to be reunited with her sister in Australia after three years apart, thanks to scooping the £5,000 jackpot in the Pride in Penrith Lottery.

Ann Dargue, who’s been a member of the community lottery since it began more than three years ago, matched her four numbers to claim the maximum jackpot, which has been rolling over since it was previously won earlier this year.

“I couldn’t believe it when I got the phone call,” Ann said. “At first I thought it was a wind-up. I’ve never won anything before.”

Ann joined the lottery after she read about it in The Herald when it started in July 2010.

“I saw that the lottery would be giving money to various charities,” she said. “I was born and bred in Penrith and the lottery seemed a great way to help a lot of different groups in the community.”

Ann’s had no problem working out what to do with her winnings – and it sounds like it won’t just be the humans in the family who’ll benefit.

“I’ve three grandchildren and nieces and nephews, and it will be nice to be able to give them something at Christmas,” she said. “This really has come at the right time, when all the bills are going up. My dog, Monty, has to have surgery on his legs soon and this money will be a big help with the vet’s bills.”

Ann said Monty’s also in line for a big bone, and there’s fresh fish on the menu for Tom the cat!

But the biggest prize for Ann will be seeing her sister again, who’s been living near Sydney in Australia for almost forty years.

“I’d like to use this lottery jackpot to go and visit her next autumn, which will be spring time in Australia,” Ann said. “By then, it will have been three years since we’ve seen each other.”

Ann has always found being in the Pride in Penrith Lottery a rewarding experience – now in more ways than one.

“When I joined, I never expected to win anything in it; it was to help the charities,” she said. “Over the years I’ve read the articles in the paper about all the different groups who’ve benefited, and I’ve enjoyed seeing that my money’s going to good use.”

Ann’s hoping that hearing about her win will encourage more people to join.

“You’ll be helping charities, and it’s a really nice surprise when you win something!” she said.

Presenting Ann with her cheque, the lottery’s chairman Rob Udale thanked her for her long-standing support.

“We simply couldn’t exist if it weren’t for the generosity of people like Ann, and we would really welcome more members, so that we can give out more grants to support the fantastic work that local groups do in our community,” Rob said.

“We’ve been able to give out nearly £35,500 to good causes so far, thanks to the £2 a week that our members contribute.”