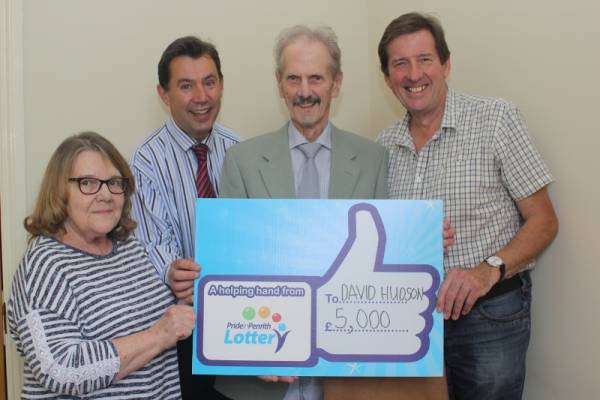 It’s a double celebration for the lottery!

A Penrith shop owner’s generous support for the community has been rewarded with a windfall. David Hudson, of Dave Hudson Electrical in Great Dockray, scooped the £5,000 jackpot with the Pride in Penrith Lottery this month.

David was among the first people to join the lottery when it began six years, taking out several lines.

“The lady I spoke to from the lottery explained it would support good causes and I thought it sounded like a great way to help the local area, and you have the chance of winning some money, too,” he said.

The lottery has proved lucky for David. Over the years since he joined, he has won £25 on a few occasions after matching three out of his four numbers.

David, who is a beekeeper in his spare time, has been rooted in the community in Penrith for many years, starting his business in the town in 1972. He’s now ably assisted in running the shop by his three sons, David, Nick and Paul.

For the lottery, it’s a double celebration after reaching a mammoth milestone in grants and the maximum jackpot this summer.

“We’ve now given out more than £100,000 in grants since we began – money that wouldn’t have been available to local organisations, clubs and events otherwise,” said the lottery’s chairman, Rob Udale. “The lottery has given local people a way to help lots of different causes in the area, and, as a board of volunteers, we’re immensely proud to have helped make that possible.”

In the first year of the lottery, 2011, more than 300 people joined and £7050 in grants was given out. Local charities including the Hospice at Home and Sunbeams Music Trust were among the first recipients, along with events, sports clubs and improvements in the town.

“I can’t thank our members enough,” Rob said. “Like David, many of them have remained in the lottery for many years and a lot of people in the community have benefitted from their generosity. Over the years, the demand for grants has grown, especially in the current economic climate now that other pots of funding are harder to come by. We need new members more than ever so that we can meet the requests for support we receive from the fantastic local organisations providing such great services for our community.”

« Apply for the best little job in Penrith!