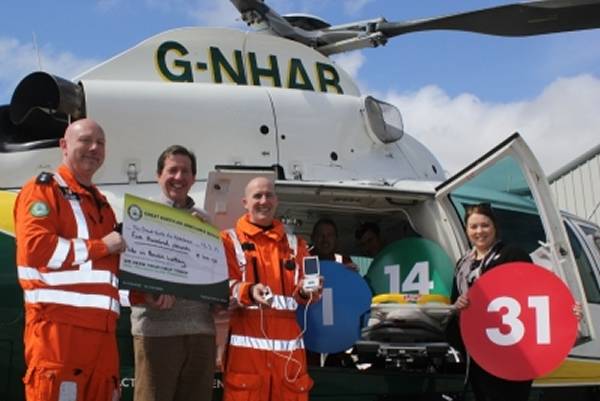 Grant goes from Pride in Penrith to Pride of Cumbria

Penrith’s community lottery went ultrasonic this week after handing over a £500 grant to the Great North Air Ambulance Service.

The money, raised through the Pride in Penrith Lottery’s weekly draws, has been put towards a new portable ultrasound machine for the Pride of Cumbria helicopter based at Langwathby, which serves the Eden area and beyond.

“This is a lottery grant that any one of us in Penrith and Eden could feel the benefit of,” said lottery board member Richard Utting, who visited the Langwathby base on Wednesday 13 May to see the helicopter and meet the crew.

“We’re very fortunate to have the Great North Air Ambulance Service base in Langwathby, and their new office in Penrith has strengthened their presence in the area even more. Most of us know someone who has benefitted from the lifesaving care this team provides and it’s a privilege to be able to support them.”

The lottery’s contribution was part of a county-wide campaign to raise £20,000 for two ultrasound machines – one for the Pride of Cumbria helicopter and one for the response car the crew use when conditions prevent flying.

“These ultrasound machines will make a big difference because they’ll allow us to diagnose a range of conditions and injuries, which means we can pinpoint the most effective treatment without any delay,” said Terry Sharpe, GNAAS aircrew paramedic.

Medics have already used the ultrasound to make life-saving decisions.

“Every mission we fly and all the equipment we have is paid for through fundraising, so without the support of people in Penrith and across Cumbria we wouldn’t be able to carry on operating,” Terry said.

“Grants like this one from Pride in Penrith Lottery and donations from the public make it possible for us to be here providing this service for the community.”

The Great North Air Ambulance Service is now working towards a new £40,000 fundraising goal to renew the defibrillators on their helicopter and rapid response car in Cumbria.

Pride in Penrith Lottery has given out more than £13,500 in grants this year so far, to nine organisations including GNAAS. It’s all made possible by members paying £2 a week for a line in their weekly draws, along with extra chances to win in their £500 special draws throughout the year.

“One of our members will scoop our maximum £5,000 jackpot in the autumn, if it’s not won before then, so now’s a great time to join the lottery,” Richard said. “You’ll not only be helping organisations like GNAAS, but you could also make yourself that bit richer into the bargain.”

To join the lottery and be in with a chance of winning, visit www.prideinpenrith.co.uk/how-to-join or call 07737 049516.