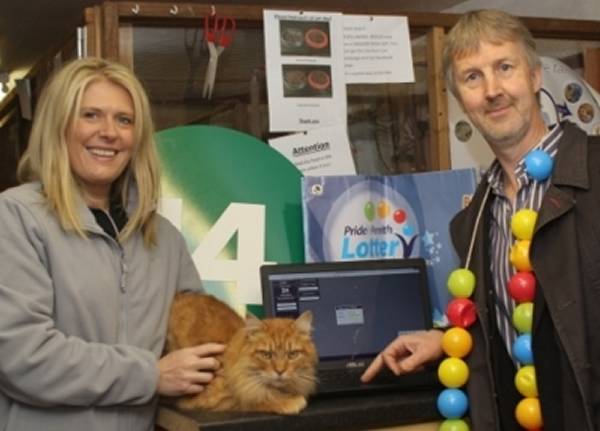 A new home for a rescued cat and a £500 prize for a generous member of the community meant a resounding win-win for Pride in Penrith Lottery’s Christmas special draw on Wednesday 17 December.

This year’s festive draw was presided over by ginger cat Robertson from Eden Animal Rescue, who was chosen by the public in a vote between six rescued cats and dogs. The winner had been a member of the lottery since 2010 and had yet to be reached at the time of writing.

“Teaming up with Eden Animal Rescue on our special draw has been the cat’s whiskers,” said lottery chairman Rob Udale. “Working together hopefully helped us both reach new supporters and find new homes for these really deserving animals.”

The partnership between Rob and Robertson wasn’t without its challenges on the day, however, as captured for posterity in a short film.

During the vote campaign, four out of the six pets have found new homes, including lucky Robertson.

“Robertson won the vote by a whisker ahead of Jack, our adorable lurcher, but he really was the cat that got the cream as he’ll be moving to his new forever home after Christmas,” said Alex Bowness from the rescue charity, which rehomes 150 dogs and 250 cats each year.

Jack and Delilah, the affectionate black-and-white cat who was also a contender in the public vote, are still hoping that 2015 will bring them a new start in loving homes.

“Jack has been with us for a year, so he’s our longest resident,” Alex said. “He is very loving and would make a super companion, but he has two little habits which mean he needs someone who can take him under their wing. He has a tendency to chase sheep, so he needs to be on a lead in the countryside, and he sometimes nips when he gets excited out walking, but he’s happy to wear his muzzle and he has a lot of love to give the right owner. We would dearly love to see Jack settled in a new home.”

Eden Animal Rescue celebrates its twentieth anniversary next year, founded in 1995. The charity survives thanks to fundraising by its team of dedicated volunteers and supporters, and more are always needed.

“Volunteers can do a huge range of jobs for us, from cutting up rags at home for cleaning out the pens, through to helping in the office, walking dogs or playing with the cats at the centre, and lending a hand in our charity shop in Penrith,” Alex said. “Even just sharing our Facebook and Twitter posts is a great help.”

It’s also possible to foster the animals on a short-term basis until permanent homes are found, and if anyone would like to give the rescued pets some Christmas dinner, they’d particularly welcome tins or sachets of cat food, sardines and tuna. There are collection points at Morrison’s, WCF and Booths in Penrith, as well as at the pet shop in Devonshire Arcade and Eden Animal Rescue’s shop at Great Dockray.

With Christmas just around the corner, Rob added that lottery membership makes a very valuable gift. “We’ve all got someone who’s really hard to buy for at Christmas, so why not sign them up to the lottery? Membership can run for whatever period you like, and costs just £2 a week. Your loved one will be in with a chance to win up to £5,000 in our weekly draws, and you’ll both be helping us to support more good causes in your community.”

« Lottery grant brings club’s plans out of the long grass